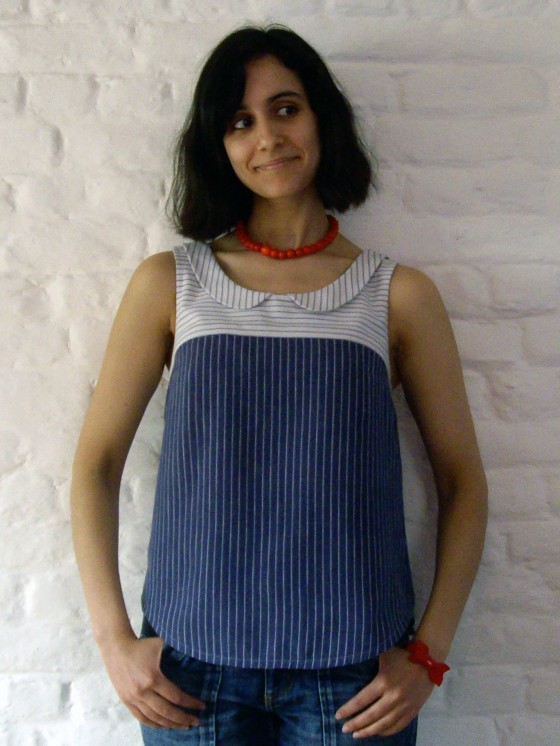 This is my first time sewing a Deer&Doe pattern. I’ve had such a crush on those patterns that I own each and every one of them, yet I had never managed to sew a single one, shame on me! I recently came across my pile of to-be-refashioned clothing that I hardly ever touch, some of which I’ve been keeping for years. Amongst them were these two shirts: 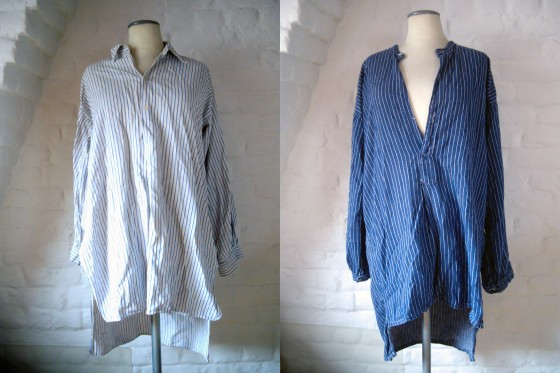 They used to belong to my father, who wore them until the eighties I think, and passed them on to me when I was a teenager in the mid-nineties. The aspiring hippie/grunge that I was at the time wore them to death (they got ripped in a few places and almost all of the buttons came off), then I grew tired of them and put them aside, but I could never resolve myself to throwing them in the trash. 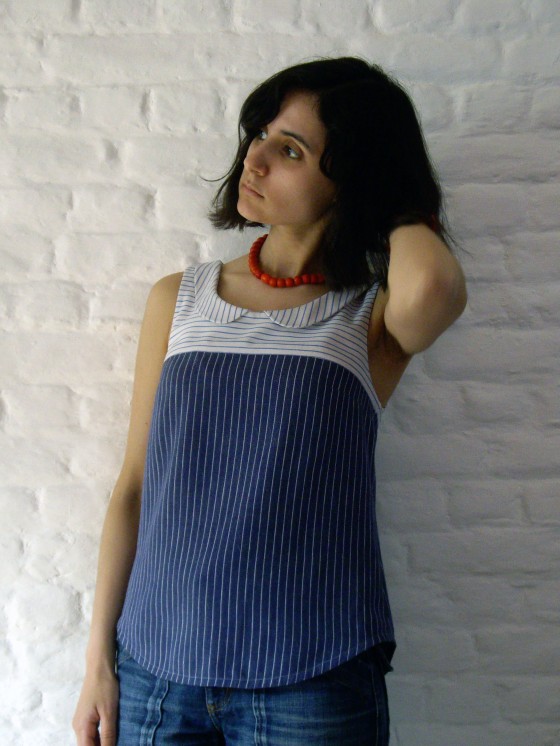 And boy I’m glad I didn’t! They pair so well together as a Datura blouse and there was just enough fabric to cut around the major flaws. 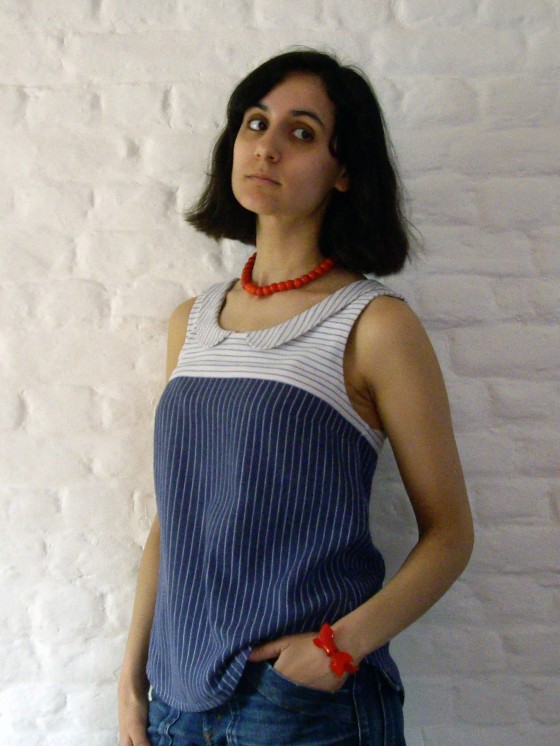 I decided to cut the yoke with the stripes going horizontally because the stripes actually aren’t the same width on the two shirts, so it would have been impossible to match them. And I must say I quite like the result with the different stripe directions. 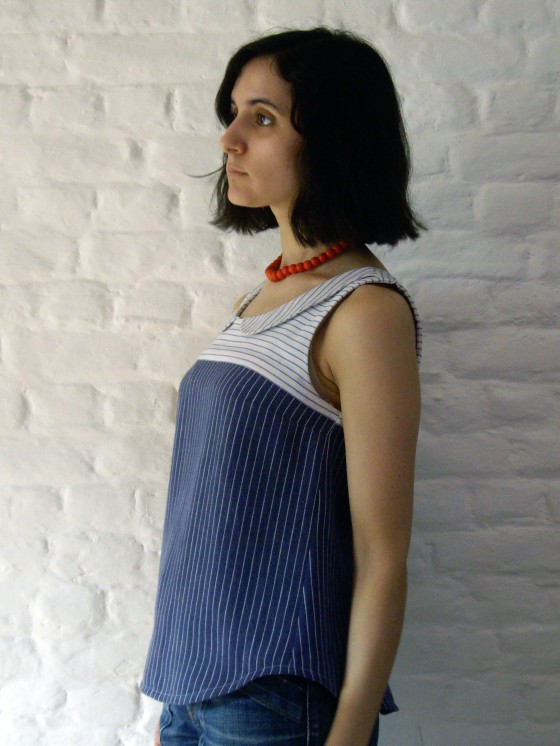 But did you notice the mistake I made (no, not the bra peeking out!)? The two parts of the collar don’t meet! I think I messed up when I tried to trace a slightly smaller undercollar for the seam to roll under more easily, oh well! The result doesn’t really bother me I must say, let’s call that a design feature! 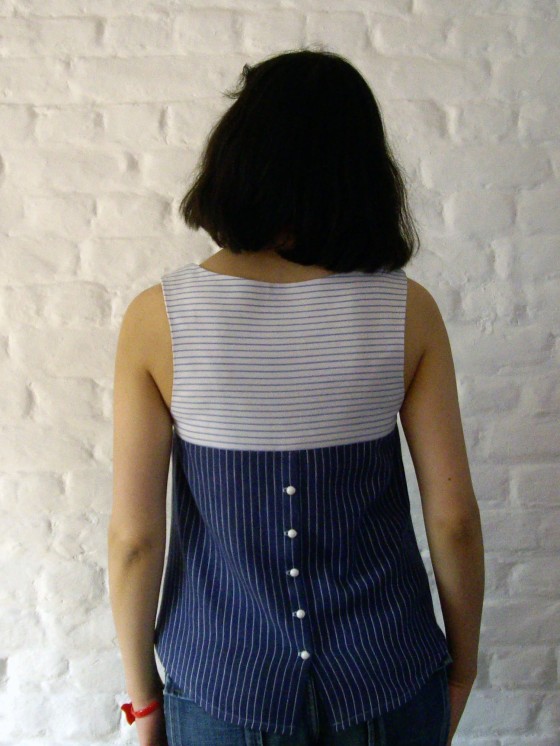 A deliberate change I made is that I put on five buttons instead of three: I wanted to use those cute little vintage round buttons I had in my stash (I hesitated between those and red ones, but I thought the white ones would make the blouse easier to match), and since they were smaller than the ones recommended, it looked better with five of them. Plus I wanted to be like really really sure that my behind be covered at all times, so I sewed the last button lower than indicated on the pattern. Other than that I followed the pattern to the letter. The directions were very clear, with helpful drawings whenever needed, though I had a hard time understanding how to sew the inside and outside yokes together, but I managed it in the end! 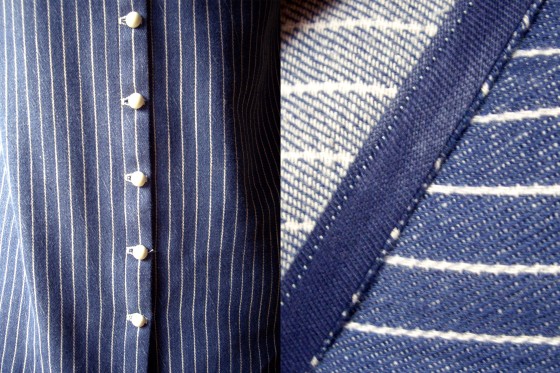 Oh yes, one last thing I forgot to mention is that I didn’t have enough fabric left to cut my own bias tape, so I used a very narrow vintage one I had in my stash. Come to think of it, I didn’t have to buy a single notion to sew the blouse! Anyway, with this bias tape, the way the yoke is constructed and the French seams I used on the sides seams, I can truly say that the inside looks just as nice as the outside. So, despite its flaws, I’m very happy with my blouse (though after such a long winter it felt so weird being sleeveless while taking the pictures). It won’t be my last Datura and it certainly won’t be the last Deer&Doe pattern I sew! 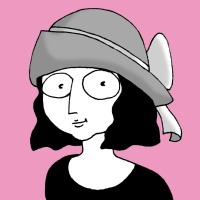