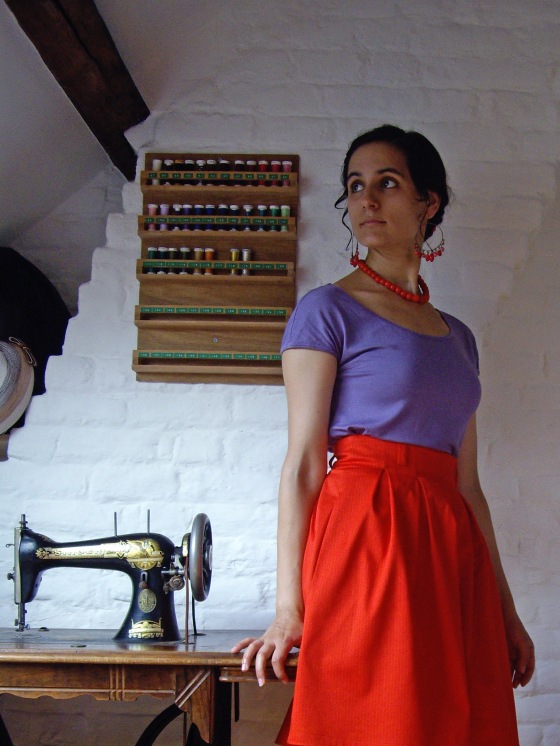 Two Deer&Doe patterns down, six to go! Oh how I love those patterns…

This is the Chardon skirt, of course. I made view 2, with the belt loops. I used a red cotton sateen with subtle stripes from Sacrés Coupons in Paris that I’ve had in my stash for a couple of years. The fabric has a slight stretch to it, which let’s hope won’t cause the skirt to stretch out of place (the interfacing I used should prevent that), and it was a joy to work with.

The pattern, too, was a joy to work with. There were few pieces and the instructions were very clear. To the exception of the part that tells you how to attach the belt loops: the pattern doesn’t explain exactly how to sew the loops on. I had no problem doing that without the instructions, but the pattern is aimed at beginners and I know that as a beginner I would have been kind of lost.

The skirt was really easy to put together, if not a bit time consuming when it came to the pleats. But I’m a very slow sewer, so this might be just me… About the pleats, looking at the pictures I realise I might have done a better job at pressing them before the shoot. Ah well, I’ll do that before wearing the skirt at least!

I cut a size 36 and the fit is spot on. I didn’t make any modifications. At first I wanted to add a lining, but I finally opted not to when I couldn’t find enough yardage in my stash. And I was really glad I didn’t bother with a lining when the time came to sew the zipper… I’m kind of zipper challenged, you see, so I had enough trouble inserting it without a lining! I almost gave up and hand-picked it instead of machine-stitching it, but I held on and I did manage to get a nice result in the end.

I was afraid the waist would end up bulky because of the thickness of the fabric and the pleats, but it looks ok on the finished skirt. Though I had to understitch the waist facing and it still wouldn’t stay tucked inside so I invisibly hand stiched it to the waist, which solved the problem.

My favourite part was finishing the hem with bias tape. It was so easy yet looks so nice! I’ll surely use that method in future projects. I used a red and white polka dotted bias tape which looks so cute against the red of the skirt even though it’s not exactly the same shade. Confession time: I had planned to use another bias tape (with another motif) whose shade was closer to that of the skirt, but I cut it too short… and then I couldn’t for the life of me sew two pieces together to get more length! I tried and I tried and got it wrong every time… so I finally gave in and went to buy some at the fabric store. I felt so lame! Oh, and of course there was a massive sale going on at the otherwise too expensive store, so I may or may not have bought a few metres of fabric that went to join a now overwhelming stash…

Well, at least now I have a skirt I love (and cute new fabric to boot!) and I know I’ll be wearing a lot. I recently came to the realisation that, even though I consider red to be a wardrobe staple (it’s kind of a neutral, isn’t it?), I didn’t own any red pieces except for my new playsuit (do a T-shirt and an old frumpy cardigan really count?). So that’s one gap filled!