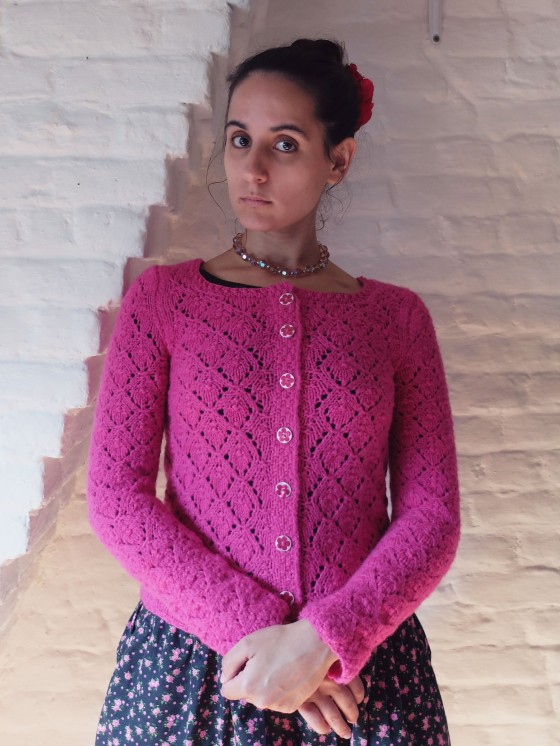 Three knitted projects in a row, not a single sewn project in between. What can I say? Three weeks in Spain, far from my sewing machine, followed by the start of school and its unavoidable fatigue… Not the ideal conditions to get back to sewing!

Ah well, at least my beloved knitting needles can go everywhere with me and one row here, one row there, I ended up with a new cardigan!

Most of this cardigan was actually knit in Spain, on a stone bench next to an oleander – adelfa in Spanish. For my last two weeks there I was staying in a village where I didn’t have a lot to do but to knit or read (I’m not complaining here, this is my ideal kind of vacation!), so in those two weeks I finished the body and a sleeve and I knit more than half the second sleeve. Then I came back to Belgium (and to work), and the remaining half sleeve and neckband took me two whole new weeks to knit. 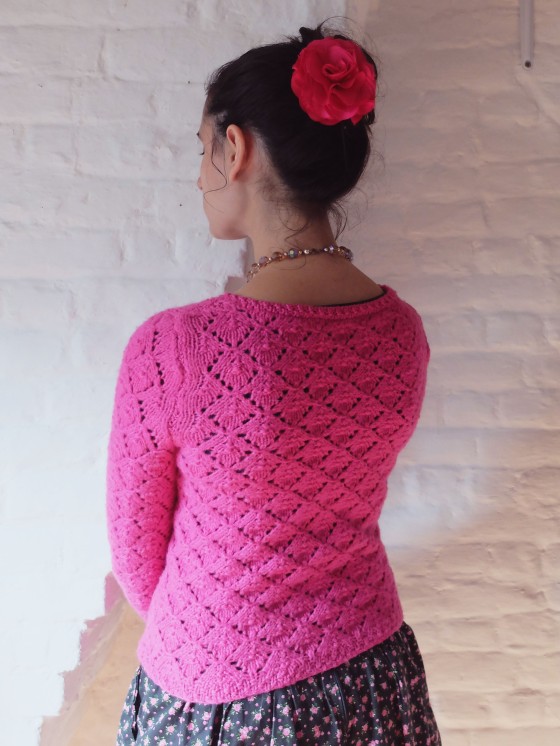 The (free) pattern is Que Sera by Kirsten Kapur and the yarn is Cascade 220, knit with bigger needles to get gauge. I made a few small modifications to the pattern: first, I added three buttonholes to the five of the pattern. I thought they looked a little too far apart in the pictures.

Then I lengthened the sleeves by one pattern repeat (12 rows) and I knit them in the round. I had to adapt the lace pattern a bit for it to work in the round (see my Ravelry notes), but that was really easy. Because of my knitting the sleeves in the round, I was afraid the sleeves would end up too wide for my taste (since there would be no seam allowance to take in account), so I knit them a size smaller than the body. Note that knitting the sleeves in the round also made them much more difficult to block correctly (which is why I’m particularly glad that I lengthened them a touch!). But I was very happy not to have to seam them up afterwards, so there’s that.

Also, when I first tried on the cardigan with the buttons closed, the button bands gaped like you wouldn’t believe. So I had to stabilise them with petersham ribbon. I used a method that is very similar to this one, except that I didn’t interface my petersham and that I took care to make all of my hand stitches virtually invisible because clearly I’m a psychopath. It took me four episodes of Murder, She Wrote (Have I ever told you about my passion for Murder, She Wrote?) to sew on the petersham but come on, look how pretty! 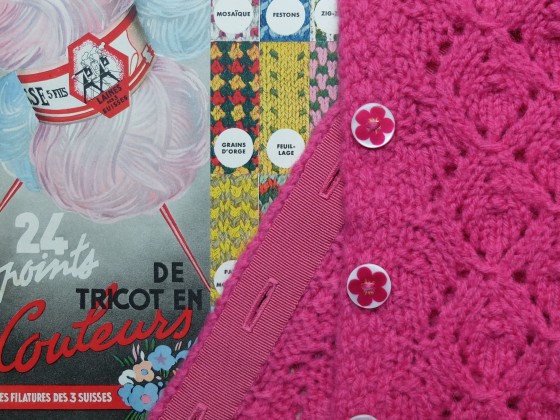 So that’s it, I’m delighted with my new cardigan; I love its style and colour (closest to the detail picture of the petersham button bands, by the way) and I’m sure it will look great with a lot of my clothing pieces, existing or to come!

PS I forgot to mention this in my last two posts, but I’m on Instagram now!