I made this dress as a replacement for one of my go-to summer dresses, which was one of the first garments I sewed. The dress in question was actually a vintage dress refashion, so it’s kind of a miracle that the fabric had held up for so long, but I was still sad when I realised I couldn’t wear it anymore.

Then again, I was also glad to have an excuse for sewing myself a new one of course!

I had bought the fabric (100% cotton; the brand is Little Darling) earlier this year at the Stoffenspektakel with this exact dress in mind. It was a delight to sew and is also really nice to wear.

As for the pattern, well, I didn’t use one! I drafted this dress myself, you see… OK, OK, my “pattern” is literally a rectangle! 😀 And two of the sides were in fact the selvedges of the fabric. So the cutting part was not too difficult: I just had to tear a piece of roughly the length of this dress (and a few centimetres more just in case – which I ended up using as you can see on the finished dress)… and that’s it!

Same with the shoulder straps: after I measured the desired length and width of my straps, I simply tore four pieces (not forgetting to add seam allowances), then rounded one of the short edges of each.

What makes the dress is the shirring of course. I used a method similar to this one (after sewing the fabric piece into a tube – with a French seam – and making a casing at the top to insert a piece of elastic afterwards to avoid ruffles) and it was, once again, very easy. But man did it take a long time! Eighteen rows of shirring along 1,50 m of fabric, I was feeling murderous near the end! Then I saw how cute the shirring looked and I relaxed a little bit. 😉 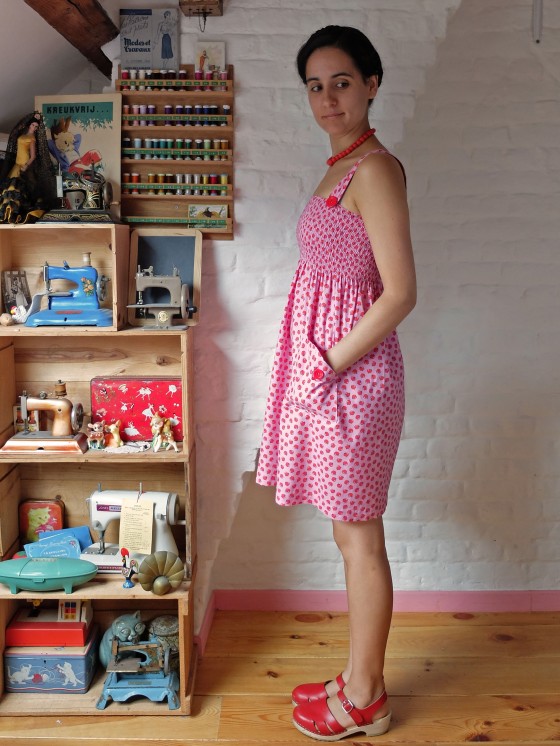 I forgot to take close-up pictures of the pockets, but they are almost the same (just a little bit deeper) as these ones, made following this tutorial. I did take a picture before attaching them to the dress, though. The buttons on the pockets are the same as the buttons on the straps, only smaller. I bought them at Veritas… in Luxembourg (I hadn’t found any I liked here in Brussels and I was spending two days there)! None are functional.

There are two small things I’m not so fond of with this dress. The first one, the fact that it creates a sort of semi muffin top under the arms (front and back), is inherent to this type of garment, at least on my body. And the second one is simply that I didn’t think to interface the shoulder straps and that they are a touch limp as a result. These two details are what stops me from loving this dress as much as I love the previous one I showed you, but I still like it a lot!

See you soon for the rest of my summer sewing projects!