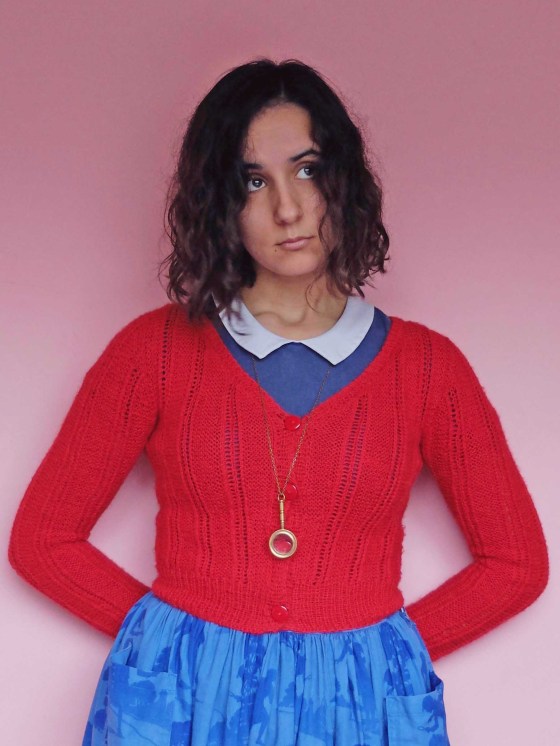 The first time I wore my purple Emery dress, I reached for a red cardigan… and realised I didn’t own any ! How was that possible? I could think of so many outfits that could be topped off with a cropped red cardigan! So the colour of the next knitting project in my queue was easily decided.

The project in question was Andi Satterlund’s Mary Mead cardigan, which she had published earlier that year. She advised in her blog post about the pattern to use a yarn with silk or alpaca in it in order to get the best result with the garter stitch, and the Alpaca yarn by Drops seemed to be the correct weight (as did the BabyAlpaca Silk yarn, but I preferred the colour of the Alpaca one), so that’s what I ordered. I was kind of baffled at how few skeins I needed: five! And I have most of a skein left, so at €2,65 per skein, that was a pretty inexpensive knit; yay Drops, yay cropped sweaters!

I do have one small reservation about this precise yarn, though: it left red marks on the underarms of two dresses! The stains did come off in the wash without applying any special products, but still, I didn’t find this very pleasant!

Being used to the construction of Andi’s sweaters and seeing that the stitch of this one was quite simple (columns of garter stitch and of very basic lace), I thought I’d be done in a month, a month and a half tops, ha! It took me close to SIX MONTHS! I kept messing up the garter stitch columns, realising twenty or more rows afterwards that I had knit a few stocking stitches instead… So I unravelled and reknit an incalculable number of times both body and sleeves, and completely lost steam on the way. 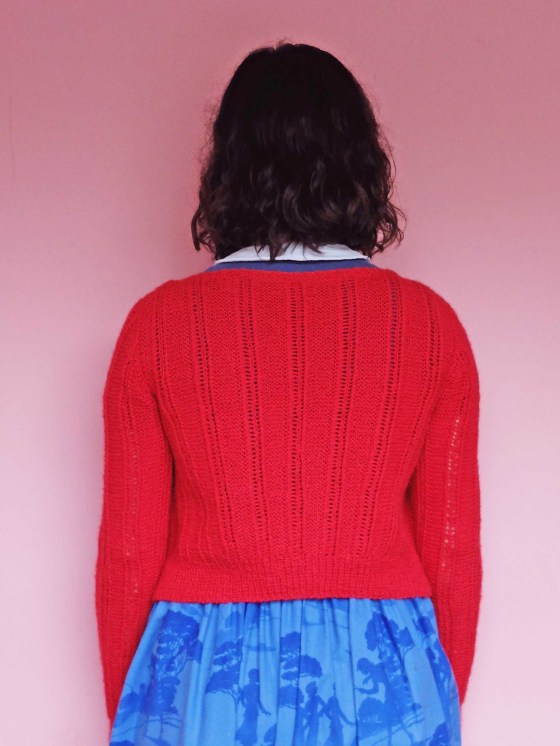 But I did end up finishing the cardigan, and those countless times I had to unravel and reknit were completely worth it as it’s now my most worn cardigan! It goes with so many things in my wardrobe, I can’t believe I waited for so long before even thinking of knitting this one!

I don’t know whether it’s the gloomy weather or what, but I so haven’t been in the mood to take pictures of this project. It’s been finished since November 18 and I only (begrudgingly) took the pictures yesterday. I usually prefer taking pictures of my creations before I wear them for the first time because I’m afraid I’m going to ruin them and not get a chance to capture them for eternity or something, but this one has already gotten its fair share of wear before getting photographed.

This means I can reflect more objectively on its qualities and flaws: I realised by wearing it that the sleeves, which I wanted to be long, have a tendency to creep up a little bit after a moment and not cover my wrists anymore. As you can see in some of the pictures, I mostly wear my sleeves rolled up, but still, I like having the option of real long sleeves, for when I’m riding my bike in the cold for example. Same with the body: I wanted it to hit exactly at my waist, which it does, but once again when I move it rides up a little bit and I have to readjust it. It’s not so much a problem when I wear it with a dress like I do in the pictures, but with a skirt I risk exposing what I’m wearing under the sweater. I still have enough yarn left, so I’m thinking of unravelling the ribbed parts, add one or two stripe repeats then reknit the ribs. Easy. We’ll see how long it takes me to get to it! 😉

See how the sleeves creep up?

The pattern is Coronis by Emily Ringelman, from Pom Pom Quarterly #10 (best magazine name ever by the way) and it was really easy to follow yet pretty interesting to knit. You can take a look at my Ravelry notes for more technical details.

From afar it looks like yet another navy/white striped sweater, but there’s a twist! Look at this detail picture:

These stripes may look complicated, but they aren’t at all. You only work one colour per row, and the pattern is really easy both to understand and to memorise. The wool is Drops Alpaca, which I loved working with and love wearing. I already have another project in my queue using this same yarn. 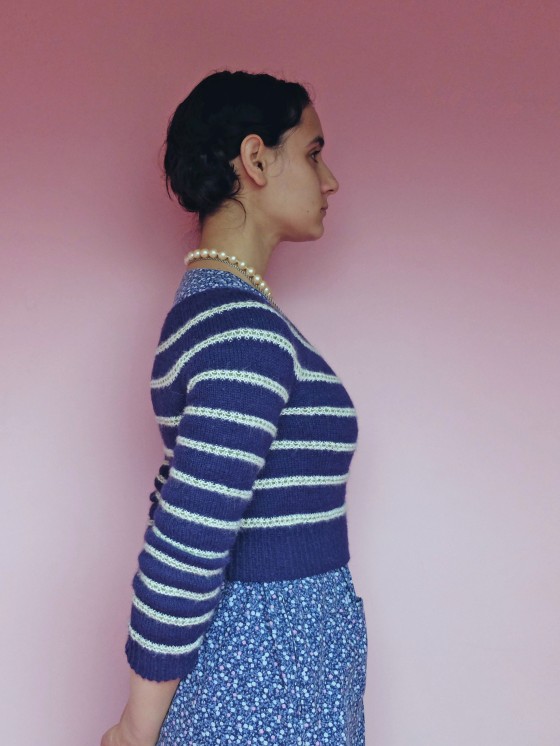 I completely messed up the gauge on this sweater: I suddenly decided my gauge (which I had checked beforehand) was too loose, so I unravelled what I had already knit and started over with smaller needles. I still don’t know what possessed me: when have I ever knit loosely? The answer is NEVER! I’m a tight knitter, have always been and will always be! It’s a good thing I had decided to knit this sweater with positive ease for once and ended up with a sweater with negative ease, instead of a too tight sweater as I would have if I had decided on a sweater with negative ease, which is usually my preference for that kind of cropped sweaters. 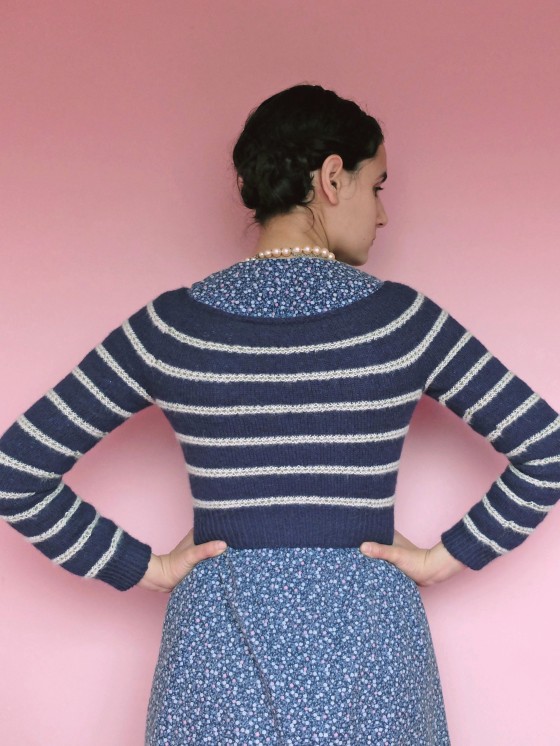 Because of that impromptu change of needles, I had to knit way more rows to get the length I wanted, so I ended up with more stripes than on the original. And I’ll have even more rows and even more stripes when I add some length to the sleeves and body.

But I guess having too many stripes is not the worst flaw a sweater can have, so once I get to lengthening it I won’t have anything negative to say about it anymore! I really like the style and the fit and I think it will look very cute with quite a few of my dresses and skirts! 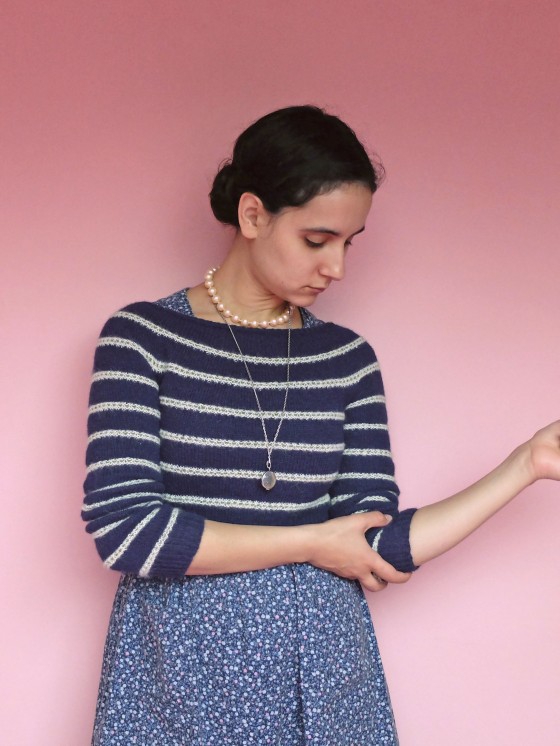