Last Friday, for the monthly meeting of my knitting group, I was reluctant to take my current knitting project with me: it’s a very simple project, except for five rows of lace that I had to frog six or seven times (I actually lost count after a moment) because of small mistakes I could not fix without ripping the whole lace part (it’s the kind of lace you have to work even on the back rows, you don’t just purl those)! I was once again at the beginning of that tricky part, so I didn’t want to risk ruining it again by not paying enough attention while chatting away with fellow knitters. 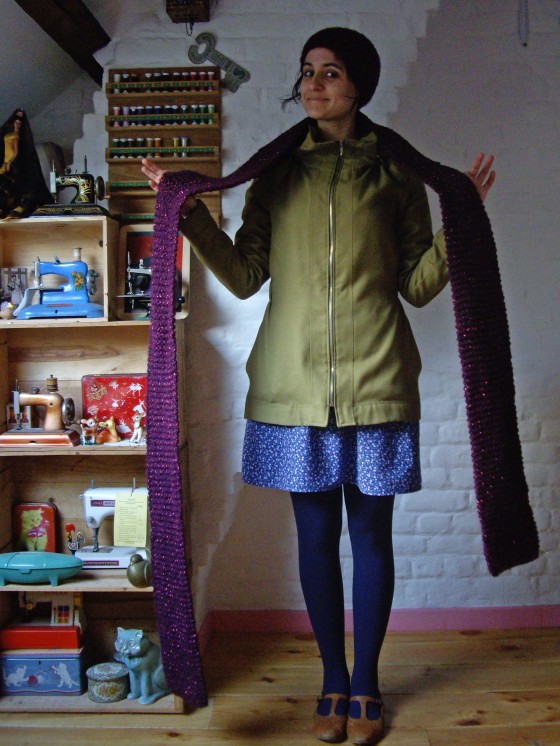 So I decided to break my self-imposed no UFO rule and bring a simple project I could knit without even looking instead: enter the garter stitch scarf, knit with 10 mm needles! I hadn’t knit a scarf in years: I used to knit one scarf every winter when I didn’t know how to knit “real” garments yet, but since I learnt how to knit shawls, cardigans and sweaters, I hadn’t even thought about knitting a simple scarf, as if it was too easy or something.

It was sooo easy, and such a relief from the lace that had begun to challenge my sanity! I started knitting it on Friday evening and finished it on Sunday, and it’s not like I spent my whole weekend knitting either. Oh, and I made a matching hat on Monday with the leftover yarn!

The yarn is Avelita by Schachenmayr, in a beautiful deep purple colour. I don’t know whether you can tell from the pictures, but it’s sparkly thanks to a pink/purple metallic thread. The garter stitch showcases the glitter effect beautifully.

I cast on 15 stitches and I knit until the end of the seventh ball, which makes for a really long and squishy scarf that you can wrap around your neck up to four times (I only wrapped it up to three times in the pictures). For the hat, I cast on 46 stitches in the round. I knit ribs for a few centimetres then garter stitch.

I’m really happy with my scarf anf hat set and they’ve already been keeping me warm all week (nothing beats four wraps of scarf when you’re biking to work early in the morning!). I should stop thinking that very simple projects are not worth knitting, especially when I see how rewarding it was to get a finished project I’ll get a lot of use out of in four days instead of a (few) month(s). And finally, I own a scarf that is not green! No more (unintended) clashing outfits!