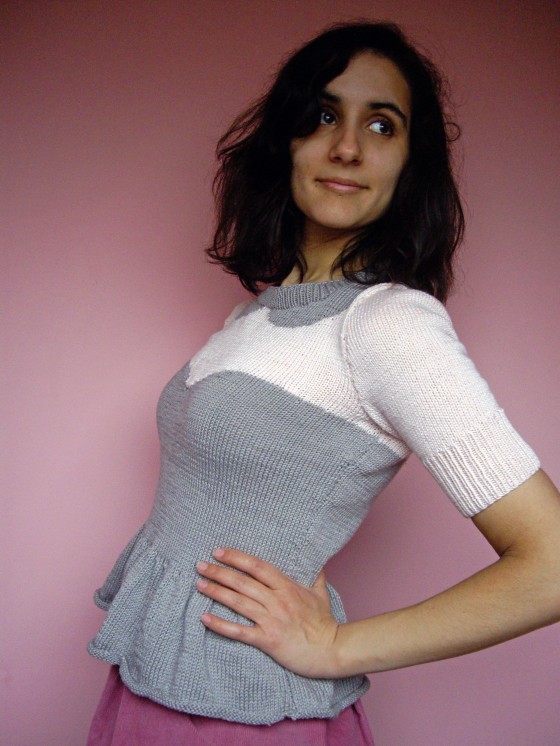 Hey, I finished my Summer sweater! In November, how timely!

I actually finished it two weeks ago, but I really didn’t feel like taking any pictures, what with the lack of time and daylight. I finally took the time to take some pictures yesterday, only to realise afterwards that I had completely forgotten to iron the peplum. Ah well, there’s no way I’m taking the pictures all over again, so you’ll have to forgive me for the wrinkled peplum and its curling up hem.

The pattern is from Phildar magazine #86 (sweater #29). I mostly followed the instructions, the only tiny changes I made were to knit a longer peplum (13 cm instead of 12, how daring of me!) and to pick up stitches for the collar instead of knitting it apart and then sewing it stitch by stitch as per Phildar instructions.

I used the recommended yarn, Phil Coton 3, in Mercure and Rosée. 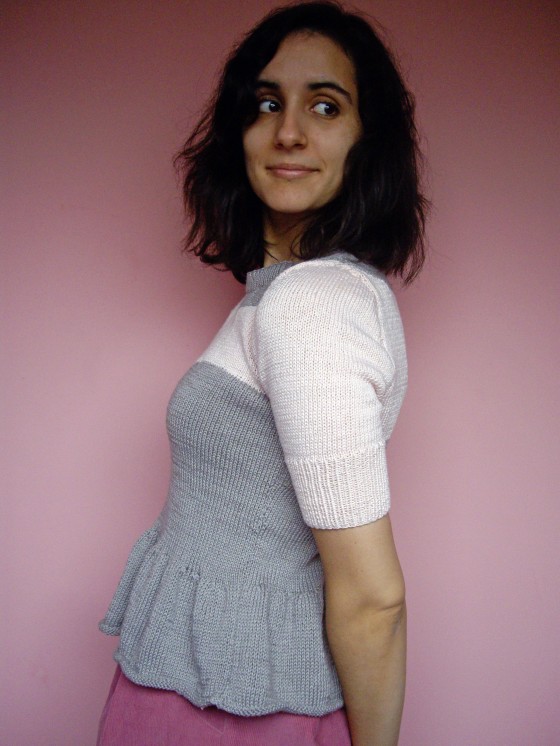 It was a really easy knit, but it made me fully realise that, while I usually love the result, I actually hate knitting colourwork. I find it so tedious with the bobbins and the tension, argh! I’m not saying this is my last colourwork project, because there are some cute patterns out there, but for my next projects I’d better concentrate on something else (ah, lace… ah, cables…). 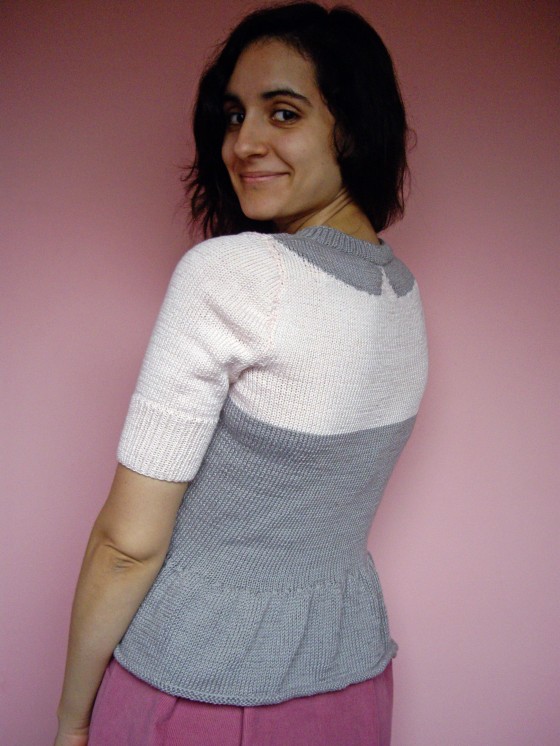 It was really hard sticking to that project once fall had arrived and made me long for cosier knits, but I’m glad I have that no UFO rule because it forced me to complete it instead of putting it away and most probably never being motivated enough to get back to it and finish it. And, even though it’s clearly not the most useful garment for November, I have to say I find it pretty cute. But how could a knit featuring both a peter pan collar and a peplum not be cute? I like the colours, too, and the trompe-l’œil strapless bodice of course. I’m pretty sure I won’t be having any trouble wearing it come the warmer weather.

PS: I have of course already started another knitting project, a wintery one this time.

It seems of late that I can’t knit for the current season: I knit a merino fall sweater under the Spanish August sun, and here I am knitting a cotton summer sweater when fall is definitely ahead of its schedule here in Belgium!

When I began this sweater about ten days ago, the weather was so warm I was pretty sure I’d be able to wear it towards the end of the month. Now I’m not so sure, to say the least! But I still want to finish it before starting another project since I don’t do UFOs (I’d never finish anything if I did).

The pattern is from Phildar No. 86. I didn’t see the potential of this particular pattern rightaway because the colours really put me off. I’m not usually one to fear colours, but come on, red and orange… and green… and black?! I’d be surprised if even one person knit this pattern in those colours! I initially thought of black and white, then I remembered I wanted to add a few grey and pink items to my wardrobe, so I chose those two colours instead.

The start of the schoolyear means I haven’t had a lot of time to knit lately, but the sweater is progressing slow and steady. The stockinette stitch and simple construction mean that I can take it with me and knit everywhere, which has helped a lot.