Oooh, shiny! Maybe too much? And also too puffy? That’s what I thought when I sewed the yoke on and saw it on the dress for the first time, especially after my boyfriend saw it too and started singing this (warning: that link makes noise!) and joking about how funny it was that I was going to a 1920s party with a futuristic costume.

But as I said yesterday, even though it’s a bit kitschy, I actually like the end result and I’ve worn it a few times already on days when I wanted to be comfortable yet put together, so I call it a success! It’s not perfectly comfortable, the armholes are a touch too tight (and they have a tendency to wrinkle after I wear the dress for some time), but it’s subtle enough that I don’t really think about it while wearing the dress.

Also, the fabric I used (a silk voile I bought for a song!) is so lightweight that the slightest gust of wind makes the skirt portion fly out and reveal, well, everything under it, oops! Let’s just say there have been a few instances when I was grateful I was wearing opaque tights. 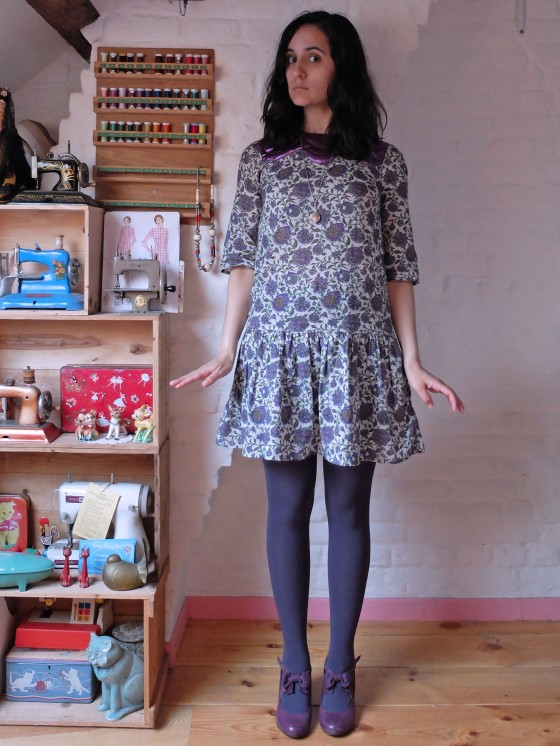 I don’t really know what is happening there. Is that my Marcianita pose?

The pattern (Viviane by République du Chiffon) is a pdf you have to assemble and trace, which doesn’t bother me too much as I trace all my patterns, and at least this means you don’t have to print and assemble too many sheets of paper, but it was a MAJOR pain assembling those sheets as none of them did match! I had to “gather” the paper in many places so that all the lines would remotely correspond to each other, not a pleasant experience. Other than that the pattern was ok and the instructions were clear, though if you ever make it I would advise drafting a facing for the lower part of the yoke to get a rounder and more even edge: if you follow the instructions for that part like I did and just turn the edge under, it’s pretty much near impossible to get a smooth result, especially with a lamé like I used.

Oh yes, and I know I’m really slow, but I was surprised at the time it took me to sew the dress compared to how easy it looks, but this may have to do with me using French seams and adding side-seam pockets, or just being even slower than I thought I was… About the pockets, I added them in the skirt part and I was afraid they would be too low, but I don’t need to perform contortions to put my tissues in there or take them out and my hands are in my pockets in most of the pictures I took, so I guess they must be in the right place.

So all in all, this was not the perfect project I hoped it would be, but it’s still a nice dress and I would not rule out making it again with a few modifications now that it’s already been traced.

PS My blog is one year old today!!! Thank you so much for reading! 🙂 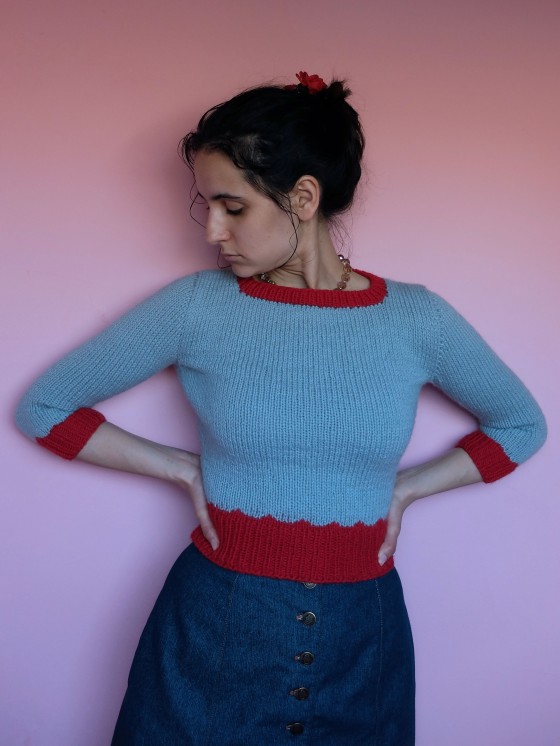 Here’s my sweater! Its red and blue scallops remind me of a circus tent and I love it!

I actually finished it on Monday, but I didn’t feel like taking pictures until today, so it had to wait. I even tried forcing myself to take some pictures two days ago, but then I saw that on each and every one of them I looked like this mean angry man with a weird yellow complexion and the battery of my camera died, so I had to accept that maybe I should wait until some other day. 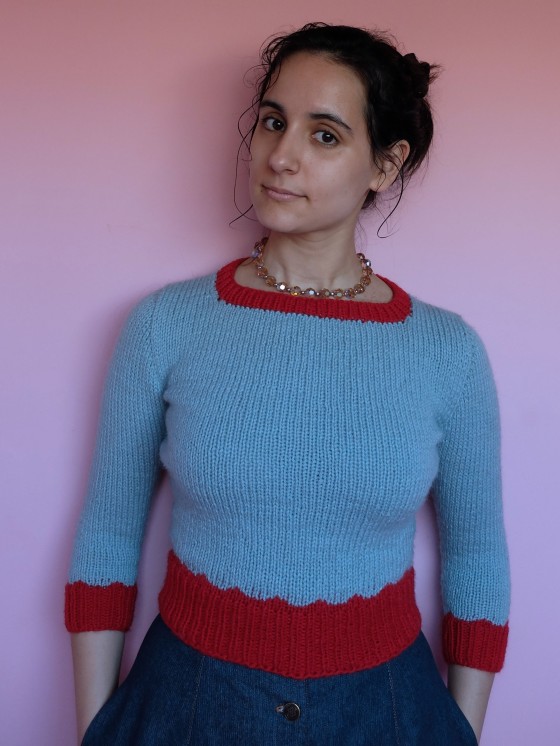 This really is the perfect sweater either for a beginner knitter or a more advanced one looking for a fast and easy project. Had I not started knitting the wrong size, I’m pretty sure it would have taken me two weeks. Having to start from scratch after reaching three quarters of the work, it still took me just under a month to complete.

The instructions are very clear, and the construction is, as always with Andi Satterlund’s patterns, flawless: I love it when I finish knitting a sweater and I just have to weave in some ends; no seaming required before enjoying my new knit!

I only made one small modification to the pattern: when I tried the finished sweater on, I found the body was a touch too long for me, which caused an unsightly pleat at the waist. So I simply unravelled a few rows of the waist ribbing (about eight rows I’d say), and voilà!

It was such a straightforward knit that I really don’t have much more to say about this sweater (ravelry notes here, by the way), except that it’s a shame the cold weather seems to be close to its end here (though in Belgium, you never know…) so I don’t know how much I’ll be able to wear it before next fall.

After my last knitting project, which dragged on for four months, I decided the next one had to be as easy and fast as possible. So I chose Andi Satterlund’s cute scalloped cropped sweater: I had already knit her Miette cardigan and Chuck sweater and each had taken me about two weeks. The yarn I’m using this time is Nepal by Drops (#7120 light grey green and # 3620 red).

I was right, this sweater is a very fast knit, but it’s not finished yet… because I knit it in the wrong size and only realized it after completing the whole body and more than half a sleeve, ugh! What’s worse, I first unravelled and reknit the sleeve a size smaller, thinking the body was ok, before realizing it was the whole sweater that was too big. The smaller sleeve on a bigger body was not a pretty sight, let me tell you! 😀

It pained me a lot to start from scratch, but once again everything went incredibly fast, and here I am with a new body and a new sleeve already, ones that fit this time, so no regrets here! It’s always so much better to lose a little bit of time to undo a mistake rather than to get a finished garment you’re not satisfied with. Also, I should always listen to that little voice in my head: I had a hunch that it was going to be too big from the beginning, yet I convinced myself I should go on and everything would be ok.

Anyway, only a sleeve and the collar to go, I can’t wait!