When I came upon this mint gingham at the Stoffenspektakel with my partner in crime, I immediately thought of making it into a matching blouse and skirt.

I knew the skirt would be a simple gathered one with giant patch pockets, because you do not change a winning team, but I dithered on the question of the blouse. At first I wanted to make a Mélilot, then thinking I could wear it tied at the waist made me think about Camille’s versions of  this Burda model I had in my stash, and then I remembered Gertie’s pattern, Butterick B5895,  which I also had in my stash (is there a pattern I do not have in my stash, that is the question!), and the deal was done!

I went in search of reviews of the pattern, and a lot of them warned about the surprising amount of ease. I took a look at the finished measurements and chose to cut a size 6 instead of between a size 10 and 12 as the body measurements would have had me cut. Now, the ease wouldn’t have worried me so much was I going to use a drapier fabric, but with this light but stiff gingham I thought it would be wiser to go down a few sizes for fear of getting a much boxier blouse than I intended.

Another thing I read in a lot of reviews was that the blouse was very short. Once again I referred to the finished garment measurements (I also measured the length of the pattern pieces just to be sure) and I decided against modifying the length. But it’s true, the blouse is indeed very short: I suspect I am very high waisted and it falls right at my natural waist.

The pattern only has four pieces, but man do some of them look weird! The only tricky part to sew is the collar, for which you need to be very precise in your cutting, marking and sewing, and I found the instructions perfectly clear.

One thing that worried me was that the grainline does not run parallel to the centre front line, so I had to ignore the grainline on the front pieces for the plaid to be straight on the button bands. Fortunately, this did not cause any problem in the end, phew! The grainline isn’t parallel with the centre back either and I actually like the effect there, but I know it would have bugged me to no end if the gingham didn’t run parallel with the edge of the button bands in the front. 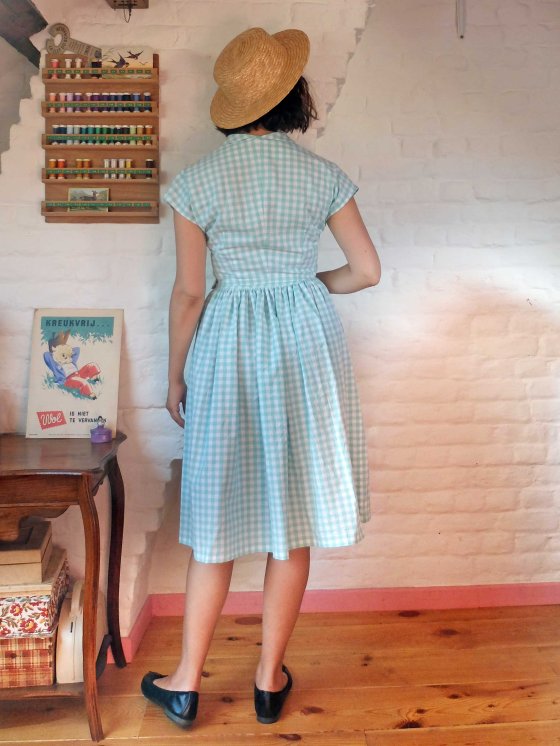 When I first tried on the finished blouse minus the buttons/buttonholes, I realized that going down two sizes and a half meant I should evidently have lowered the darts. So I set out to unpick the side seams and lower the darts by about 3/4’’. I think it was well worth the effort: here’s the before and the after.

After that all I had to do was add the buttons and buttonholes (actually not that easy when you want your centre front plaid to match!), and then make the matching skirt! 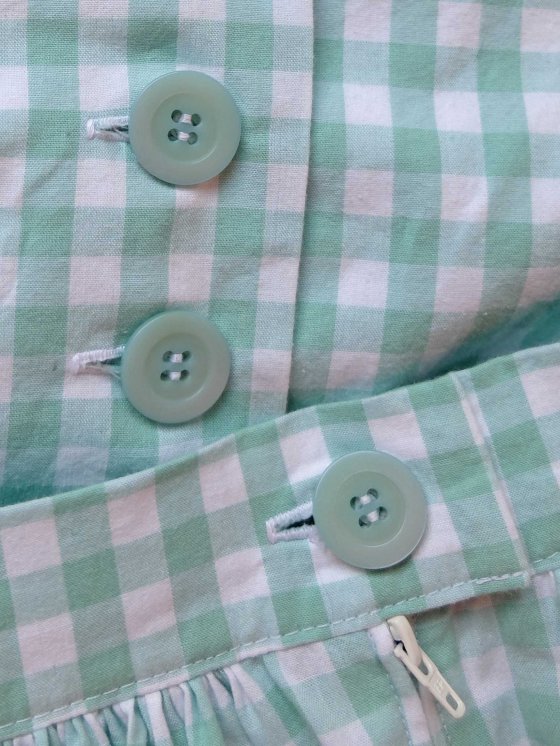 I don’t have a lot to say about the skirt, it’s yet another simple gathered skirt. Just like for the blouse, I took a lot of time pattern matching. Instead of pinning, I found it easier/faster (still very time-consuming) to baste the pieces together before sewing them. Once again, worth the extra time.

I like my little matching ensemble, but in fact I’m not sure I’ll ever wear the two pieces together. Separately, yes (already have), together, I don’t know. Perhaps it’s a little too over the top? I really don’t know, we’ll see! And worse comes to worst, I’ll still have a cute blouse and a cute skirt!